Double Murder in Oregon - It's a Family Affair 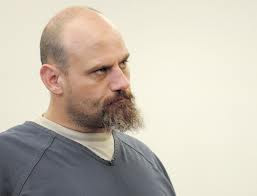 
An Oregon man has been charged with killing his mother-in-law's 19-year-old husband and 70-year-old ex-husband during a family trip to the coast, the authorities said.

Timothy Henson then kidnapped his wife and mother-and-law before officers discovered them off a spur road a few miles from the scene of the double homicide, said R. Paul Frasier, the Coos County district attorney.

Henson allegedly fired one-to-three shots inside the vehicle, with a bullet hitting his wife, 30-year-old Vallena Tuell, in the forearm. The car came to a stop and Henson shot George Micheaux III, 19, and Milton Chester Leach, 70, outside the vehicle, Frasier said.

The family lived together in Myrtle Creek, about 90 miles east of the crime scene. Henson and his wife lived in the house, the Micheauxs have a trailer on the property and Leach, the ex-husband of Ruth Sherrie Micheaux, stayed in the garage.

Another lawful gun owner who turns out to be a dangerous and irresponsible person.

This is the reason the gun-rights advocates are so aggressive in their defense of gun rights.  They know that a certain percentage of their number are like this guy.  I call them hidden criminals.  We also number them among The Famous 10% (soon to be upgraded to 50%).

What's your opinion?  Please leave a comment.
Posted by Unknown at 8:12 AM