Lawful CA Gun Owner Decides to Shoot Up the Neighborhood 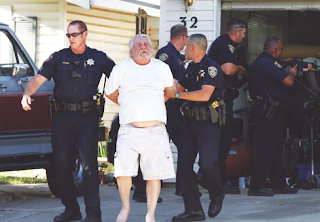 
According to Woodland police Sgt. Brett Hancock, Woodland resident Steven Ray James, 57, had gone to another residence on Johnston Street near Depot Street and fired a number of shots into a residence and a Chevrolet. No one was hurt.

Upon further investigation, it was learned the shooting occurred as a result of an ongoing civil dispute over the Chevrolet, Hancock said.

Simply put, this is yet another so-called lawful gun owner who showed his true colors.  A guy like this, before being caught acting out, could best be called a "hidden criminal." Gun owners who drink too much, who settle disputes with guns, cannot rightly be called law-abiding even if they'd not yet been convicted of anything.

The gun-rights folks want us to maintain an attitude of "innocent until proven guilty," which is fair enough.  But they should not insist that all who have not yet been proven guilty are truly innocent.  That's why we have that middle category called "hidden criminals."

Next comes the question of how big is this category.  When forced to admit its existence, the next ploy used by the pro-gun crowd is to minimize the numbers.  Insignificant, they say, negligible even.

I don't agree.  What do you think?

Please leave a comment.
Posted by Unknown at 9:12 AM