What happens when climate deniers decide to try a new methodology?

University of California-Berkeley physicist Richard Muller criticized Al Gore in the past as an "exaggerator," has spoken warmly of climate skeptic Anthony Watts, and has said that Steve McIntyre's famous takedown of the "hockey stick" climate graph made him "uncomfortable" with the paper the hockey stick was originally based on.

SO, he started up the Berkeley Earth Surface Temperature project (BEST) in 2010 to show the world how to do climate analysis right. Who better, after all? "Muller's views on climate have made him a darling of skeptics," said Scientific American, "and newly elected Republicans in the House of Representatives, who invited him to testify to the Committee on Science, Space and Technology about his preliminary results." The Koch Foundation, founded by the billionaire oil brothers who have been major funders of the climate-denial machine, gave BEST a $150,000 grant.

But Muller's congressional testimony last March didn't go according to plan. He told them a preliminary analysis suggested that the three main climate models in use today—each of which uses a different estimating technique, and each of which has potential flaws—are all pretty accurate: Global temperatures have gone up considerably over the past century, and the increase has accelerated over the past few decades. Yesterday, BEST confirmed these results and others in its first set of published papers about land temperatures. (Ocean studies will come later.) Using a novel statistical methodology that incorporates more data than other climate models a

nd requires less human judgment about how to handle it (summarized by the Economist here), the BEST team drew several conclusions: 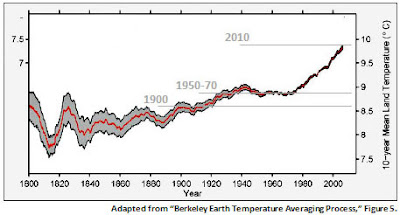 In the press release announcing the results, Muller said, "Our biggest surprise was that the new results agreed so closely with the warming values published previously by other teams in the US and the UK." In other words, climate scientists know what they're doing after all.

The BEST report is purely an estimate of planetary warming, and it makes no estimate of how much this warming is due to human activity. So in one sense, its impact is limited since the smarter skeptics have already abandoned the idea that warming is a hoax and now focus their fire solely on the contention that it's man-made. (And the even smarter ones have given up on that, too, and now merely argue that it's economically pointless to try to stop it.) Still, the fact that climate scientists turned out to be careful and thorough in their basic estimates of temperature rise surely enhances their credibility in general. Climategate was always a ridiculous sideshow, and this is just one more nail in its coffin. Climate scientists got the basic data right, and they've almost certainly gotten the human causes right too.
Posted by Laci The Dog at 1:38 PM