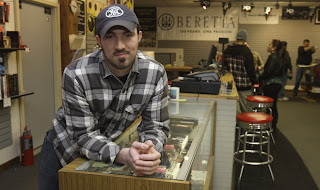 JSOnline reports how Mike Allan took over from his brother Adam when his license was revoked. Adam took over from dad, Wally, when he had to get out. These guys are a Milwaukee criminal's best friend, as we've mentioned before here and here.

Adam Allan previously told the Journal Sentinel he was going to go to work for his brother, essentially switching roles the pair have held in recent years at Badger Guns.
But Mike Allan said he decided he could not do that after talking to ATF about getting a license.
"He is not going to work here. It's probably best that he doesn't," Mike Allan said. "He is my brother. He's a good guy, and I would love to hire him, but it is kind of out of my hands."
Mike Allan said his father, Wally, co-owner of Badger Outdoors, also won't be working in the store anymore. But Wally Allan will continue to be part owner of the building and landlord to his other son's new business.

I'm sure the Allan family claim to be honest responsible gun owners and dealers. Same goes for the gun-rights bloggers who defend their every move. All irreproachably responsible, good guys, in other words.

What's your opinion? Please leave a comment.
Posted by Unknown at 7:46 AM