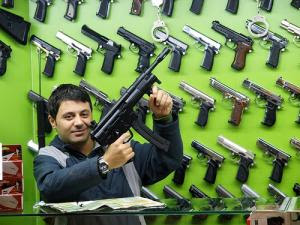 The New Hampshire state Senate rejected several controversial gun bills Wednesday. All of the proposals originally passed the House.
The move suggests that the Senate’s patience for 2nd Amendment legislation may be about up.
The Senate made brisk work of the so-called gun bills in front of them. “We spent a grand total of 6 minutes on 5 bills because we want to focus on the issues that are important to the New Hampshire people,” Senate President Peter Bragdon said.
The bills the Senate down include a measure allowing people to carry loaded weapons – including crossbows – in their vehicles and one that permits weapons in public places like college campuses, the Verizon Center and the state psychiatric hospital.

This is wonderful news. I love the way gun-rights folks keep talking like these gun bills are part of their 2A rights and therefore inevitable. It's heartening to see not everyone agrees with that.