While bringing a gun to a bear fight may seem like a solid way to win, experts say the gun largely provides a false sense of security -- and would be similar to trying to shoot, and stop, a small car careening toward you at speeds of up to 35 mph.
It's not that firearms don't work, but many people can't load or aim them quickly enough in the panicky moments of a bear attack, according to a recent study by bear researchers at Utah's Brigham Young University.
"It's more about how you carry yourself than whether you carry a gun," said wildlife biologist Tom S. Smith, the study's lead author.
The report analyzed 269 armed human-bear encounters in Alaska between 1883 and 2009, and found that the use of guns made no statistical difference in the outcomes, and many people were mauled or killed anyway -- 151 human injuries and 172 bear fatalities.

The gun fanatics often challenge us to produce statistics to prove our claims. Well, these stats seem pretty convincing to me. You've got a number of bear attacks in which the attacked person had a gun. You can't now say, but if they were trained better, or if they knew what they were doing better. You have to take the whole survey which necessarily includes all types of gun owners. 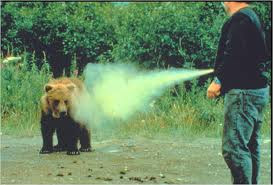 Interestingly the statistics on bear vs. pepper spray are good.

In an earlier study, Smith found that pepper spray worked for all but three of 156 people in 71 conflicts with bears.
Pepper spray also has a lasting advantage, Smith said.
"When you spray a bear, you are powerfully conditioning that animal to stay away from people," he said.

The obvious conclusions extend far beyond the wilds of Alaska. Gun owners and concealed carry folks are mistaken in their thinking that the gun makes them safe. In all too many cases it does not and there are better alternatives.

What's your opinion? Please leave a comment.
Posted by Unknown at 9:45 AM