When advocacy groups use French cops for their posts rather than US ones. 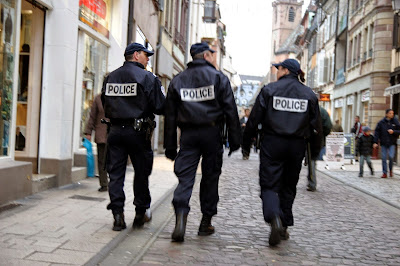 This isn't the first time I have seen this done.  The last time it was this picture of the French CRS (Compagnies Républicaines de Sécurité) around a little black boy. 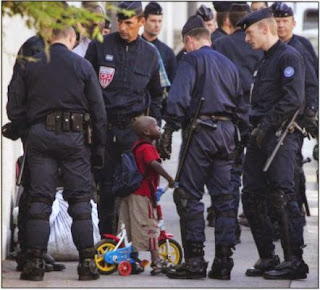 The worst part of it was that the CRS chest badge is visible in the picture the people used.  Even though the resolution was about that of the picture above, the CRS emblem is pretty distinctive.  Anyone familiar with the French police would spot this immédiatement.

And you should be able to tell they aren't US cops by their uniforms...

Is it because French cops are truly militarised?  After all, the Gendarmerie is actually an internal army as I have pointed out before.   French cops are going to look much meaner and scarier than their US counterparts: especially the CRS.

Not to mention the CRS have a reputation for being particularly nasty.

And they have a different concept of "rights" to the US in Civil Law countries.

Anyway, just a pet peeve of mine when they use furren cops.
Posted by Laci The Dog at 7:42 PM