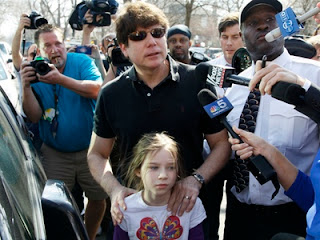 But tonight, in a sun-drenched press conference, the man known popularly as "Blago," gave America a kind of farewell statement.
He bragged about his accomplishments as if he were just about to announce his candidacy for a new office. “I got bruised and battered and bloodied, but we were able to get those done,” he said, "And I never raised the income tax.”
In the extemporaneous address he shared that he had been reading both the Old and New Testament to look for examples of people dealing with adversity.
If his appeals fail, he will serve a minimum of twelve and a half years.

To me this is a disgraceful waste of resources.  I don't care how corrupt he was or how much trust he betrayed, putting white collar criminals in jail is a waste. There are better ways to deal with them. Prison should be for violent people we're afraid of not for people we're mad at.
What's your opinion?  Please leave a comment.
Posted by Unknown at 10:00 AM