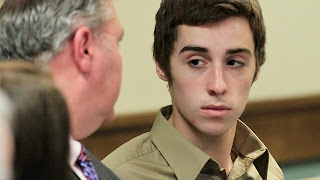 Cliff Schecter wrote a wonderful piece for Crooks and Liars

Earlier this week it happened again. We don't know all the details, but what we do know is this. A young man named T.J. Lane walked into high school—here in my home state of Ohio—approached a table full of kids and started shooting.
Like with any tragedy such as this, there were many handmaidens. Certainly, chief among them was the violence this young man bore witness to regularly, in a household reportedly filled with it. His parents, both charged with domestic abuse and other violent behavior in the past, seemingly helped nurture a disturbed and dangerous kid.
But it's also been reported that the killer's grandfather—from whom Lane accessed the gun used—had so many weapons lying around that he couldn't figure out a gun was missing until afterwards. Read that sentence again.
Teaching a child that violence solves everything and giving him access to an arsenal. That should make his family criminally liable—although, current Ohio law will not allow that to happen.
Because, make no mistake, it's a love affair with guns by an obsessive and loud minority and the resulting lax regulation, which are key reasons these things just don't happen on a regular basis in any other Western country. While TJ Lane had easy pickings among a bevy of unaccounted-for weapons, the state of Virginia—under its culturally-Ragtime-Era governor—was removing a law that limited buyers to one handgun purchase per month. Which totally makes sense—how can you hunt moose or protect your house with only 12 guns per year?

About the two handmaidens, The violent family which teaches a kid that violence is the answer, although culpable, might be hard to identify and prove in many cases. But the other one, easy access to guns is not. The grandfather should be in jail and lose his gun rights. Safe storage laws could take care of many of these situations.

What's your opinion? Please leave a comment.
Posted by Unknown at 8:09 AM