The Three Republican Weasels of the North Carolina House 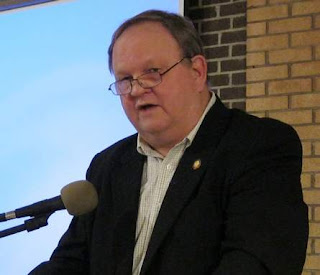 A political advocacy group is promising “payback” in this year's election against state Rep. Chuck McGrady and other North Carolina lawmakers they view as soft on pro-gun laws.
Grass Roots North Carolina, an all-volunteer organization whose main focus is preserving the right to keep and bear arms, has labeled McGrady, former state Rep. David Guice and House GOP leader Paul “Skip” Stam as the “three weasels of the North Carolina House” for what it views as the Republican trio's role in weakening an omnibus gun bill signed into law in December.
McGrady last week defended an amendment he introduced to the bill — which passed by a 59-57 vote — that allows business owners to prohibit those with permits to carry concealed handguns from locking the weapons in the trunks of their cars. McGrady said he stood by Stamm, who spoke on the House floor about the matter last summer, agreeing that it was a property-rights issue.
“I think when one owns one's property, you ought to be able to tell people whether they can bring guns or not to your property,” McGrady said.

It's fascinating how the gun-rights extremists are so quick to turn on their own if they don't tow the line. Any reasonableness or compromise is unacceptable for them and will be punished. They are true fanatics.

What's your opinion? Please leave a comment.
Posted by Unknown at 8:36 AM