You may be aware that Mikhail Kalashnikov, designer of the Automat Kalashnikov rifle wrote this in a letter prior to his death:


"The pain in my soul is unbearable. I keep asking myself the same unsolvable question: If my assault rifle took people's lives that means that I, Mikhail Kalashnikov, ... am responsible for people's deaths." 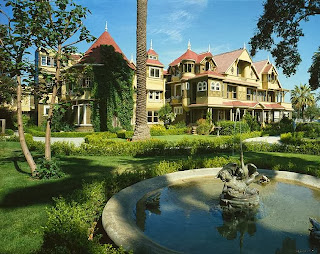 Kalashnikov isn't alone amongst the remorseful firearms manufacturers: Sarah Winchester, the widow of gun magnate William Wirt Winchester. It started with the death of her child, Sarah, from marasmus in 1866. Her husband also died prematurely of tuberculosis. She had the combined grief of losing both a child and a spouse as well as $20,000,000 and all the time in the world. She consulted spiritualists to console her grief.


According to some sources, the Boston Medium consulted by Mrs. Winchester explained that her family and her fortune were being haunted by spirits – in fact, by the spirits of American Indians, Civil War soldiers, and others killed by Winchester rifles. Supposedly the untimely deaths of her daughter and husband were caused by these spirits, and it was implied that Mrs. Winchester might be the next victim.
However, the medium also claimed that there was an alternative, Mrs. Winchester was instructed to move west and appease the spirits by building a great house for them. As long as construction of the house never ceased, Mrs. Winchester could rest assured that her life was not in danger. Building such a house was even supposed to bring her eternal life.

The upshot of the story is that Sarah Winchester built a house in California which is now privately owned by Winchester Investments LLC and is on the U.S. National Register of Historic Places and is California Historical Landmark #868.


In a Discovery Channel account about the house, "She believed her only chance of a normal life was to build a house, and keep building it. If the house was never finished, no ghost could settle into it. The house contains many features that were utilized to trap or confuse spirits. There are doors that are small or lead nowhere and windows that look into other parts of the house. The mansion may be huge but there are only two mirrors in the whole place. This is because Sarah believed that ghosts were afraid of their own reflection."

Interesting how some people are haunted by the harm they inflicted upon others.
Posted by Laci The Dog at 8:27 PM