Florida Man Shoots Wife in the Face - She Died 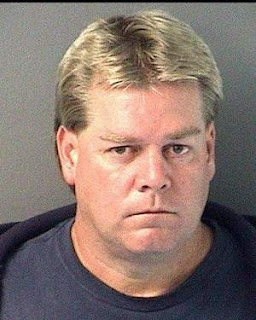 PNJ.com reports on the another domestic killing in Florida

According to Thompson's arrest report, deputies arrived to find him leaning over the woman's body. When a deputy asked who shot the woman, he said he did.
The deputy found a gun and ammunition near the body, the arrest report states. The Sheriff's Office declined to name the victim, but it was clear from witnesses' statements that she was Thompson's wife, Bobbi Thompson.
The woman died in the driveway of Mark Belanger and Phyllis Hargraves, who live across the street from the Thompsons' backyard.
The day after the shooting, Belanger said he and Hargraves were watching television Friday night in their home at the corner of La Ventana Drive and La Ventana Court when they heard a gunshot outside. Moments later, someone was knocking on their door.
"When I opened the door, Jim said, 'Mark, call 911; I shot my wife,' "

The pro-gun crowd say you cannot predict when someone's going to crack up. Well, that may be true in some cases, but in many others I'll bet anger like this guy had has manifested itself in any number of discernable ways. Drug screening and mental health exams for all gun owners would probably cut down on the frequency of these things, don't you think?

What's your opinion? Is Florida in any danger of losing the crown? I don't think so.

Please leave a comment.
Posted by Unknown at 1:46 PM