Intruder Shot in Legitimate DGU - Or Was It? 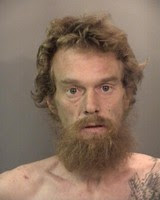 
Donna Hopper had first fired warning shots at the man after she was awakened by the sound of him trying to break into her Branstetter Lane bedroom window just before 4 a.m., Shasta County Chief Deputy District Attorney Josh Lowery said.
She shot him when he came back and tried to climb inside the window a second time, Lowery said.

Does that add up to you?  I realize when seconds count the cops are minutes away, but does that mean the guy came back a second time only seconds later. And besides that, what kind of home invader comes back after being shot at? Didn't the gun-rights folks tell us having a gun in the home deters that kind of thing?

Theis [Jesse Edward Theis, the intruder] had been released from the Shasta County jail the morning before the shooting after he was arrested Thursday on suspicion of obstructing a public officer and trespassing, both misdemeanors.
Capt. Don Van Buskirk, the jail's top administrator, said Theis was released before posting $6,000 bail because the jail was at capacity. Because jailers have limited bed space, every day they're required to release those they determine to be the least-risky inmates to stave off overcrowding.

Now, wait just a dog gone minute. By blaming this on the overcrowded jails and early release of this guy Jesse, are they saying everyone locked up for a misdemeanor should stay in jail?  "Obstructing a public officer and trespassing, both misdemeanors" should result in no bail, and what, a life sentence?

The guy who wrote this story seems to have a passing familiarity with all the gun-rights arguments about home defense, but not quite enough to put it together properly.

As an aside, doesn't Jesse Theis look like the homeless guy McNulty kidnapped in Season 5 of the Wire?

What do you think? Please leave a comment.
Posted by Unknown at 7:53 AM