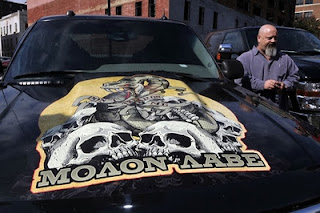 My advice prior to reading this post is to get yourself an adult beverage (maybe a Bombay Sapphire Martini, a glass of Altamura Cabernet Sauvignon (2007) or a Piraat Ale)  settle into an easy chair, and enjoy as JadeGold explains to you the meaning of "Molon Labe."

Were I a smoker--I'm not--a cigarette or fine cigar after reading wouldn't be out of the question.

It's gonna be that good.

Darren's an NRA member, CCW holder, birther,  Oathkeeper, and a minister to the Georgia State Militia.  In short, Darren's your average, run-of-the-mill gunloon. 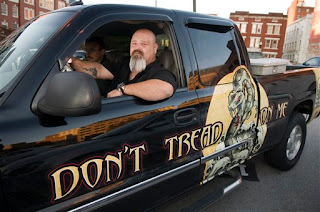 Well, Darren had himself a bit of a run-in with the law.

Seems Darren was upset his fellow gunloon, birther, NRA member and US Navy court-martialee, Walter Fitzpatrick III (I'll do a post on this guy later) had been arrested and decided he'd would take an AK-47, a Colt .45 and several hundred rounds of ammunition down to the Tennessee court to arrest himself some judges and lawyers.

You can't really expect to take over a courthouse and overthrow President Obama  and free political prisoners without a DVD titled "Tranny Hunter."

Oh yeah.  Was it good for you?  But there's more.  Check out the Wonkette comments.  My faves: