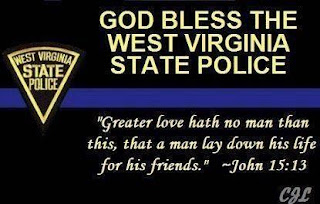 The West Virginia State Police confirms that two troopers were involved in a shootout that killed one trooper, left another in critical condition, and left the shooter dead. A Roane County deputy and a tow trucker driver were also injured by gunfire.

The troopers stopped the suspect, whose name has not been released, at the Wallback park-and-ride on Interstate 79 in Clay County. When they approached the vehicle, the suspect started shooting, injuring one trooper and a tow truck driver and killing the other trooper.

A Roane County deputy tracked the suspect to a nearby barn, killing the suspect and taking a shot to the arm. The deputy's name has not been released.

Does this count as a mass shooting? It probably does, but since it didn't happen in a school, most lists of "mass shootings" will not include it.

One thing it has in common with most incidents we readily recognize as mass shootings is the people involved do not consider whether the locale of their action is a gun-free zone or not. They just act.

What's your opinion?  Please leave a comment.
Posted by Unknown at 9:17 AM