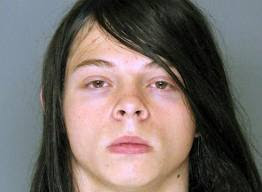 At 6:27 a.m. on his first day as a sophomore at Perry Hall High School in the Baltimore suburbs, Robert Wayne Gladden Jr. updated his Facebook status.

"First day of school, last day of my life," he wrote. He then typed a symbol resembling a person with two middle fingers extended before adding "f--- the world."

Gladden, a pale youth with long, dark hair who turned 15 just three weeks ago, has been charged as an adult in the shooting of a 17-year-old classmate, who was hit in the back with a shotgun blast in the school's cafeteria Monday morning. The victim, Daniel Borowy, remained in critical condition Tuesday afternoon.

While authorities did not discuss a motive for the shooting, Baltimore County Police Chief James Johnson said Gladden planned the attack and fired a shot at random before school staff rushed him. A second shot hit the ceiling during the struggle, police said.

This one had all the markings of another school mass shooting. Luck and timing and quick intervention on the part of the staff averted a much worse situation.

It offers a good example to discuss one of the most popular pro-gun arguments, that mass shootings usually happen in gun-free zones.

On the surface, this is a fact that cannot be refuted.  Our commenter Frail Liberty recently took the trouble to prove it using Google.  Fair enough.  Although there are many cases in which mass shootings, those involving 4 or more victims, take place at various locations in which guns are not prohibited, the major incidents have happened on school campuses where guns are not allowed.

But, it's the implication that I would like to refute.  The argument seems to be that mass shooters choose these locations for their "target rich" environment and because no resistance would be expected. If only we did away with gun-free zones these deranged shooters wouldn't act, or if they did they'd be stopped in their tracks by a johnny-on-the-spot gun owner.

Gun-rights activists love to blame the gun-free zone for the problem of mass shootings.

I submit that this is false reasoning.  Look at the details of today's story.  The young man was suicidally depressed. He wrote "last day of my life," and "fuck the world" on Facebook. He, like most of the school shooters, was not concerned with selecting just the right place to unleash his murderous rage.  He was going to the place of his troubles, whether they were about bullying or inadequacy or perceived romantic rejection.

The same is true of the fairly common mass shootings that take place at the work place.  Some of them prohibit guns, others do not, but that fact is irrelevant.  When someone decides to kill a bunch of people they are not thinking about gun-free zones.

This brings up another question, if the argument that most mass shootings happen in gun free zones and therefore gun-free zones have to go is false, why do the pro-gun folks keep pushing it.

It's simple.  This is one of the smoke-screen attempts at obfuscation in order to avoid the real issue which is gun availability.

Gun availability to unfit people is the true gun control issue involved in these cases.  Run-rights activists fear this issue because they realize the remedy, although it would save countless lives, would also inconvenience them a bit. Putting up with such regulations as licensing and registration is unacceptable to the biased gun lovers even though it would result in nothing more than a minor inconvenience.  Such incredible levels of self-centeredness is embarrassing, further increasing the need to keep the focus on gun-free zones and other nonsense instead of where it belongs, on gun availability.

What's your opinion?  Please leave a comment.
Posted by Unknown at 7:57 AM