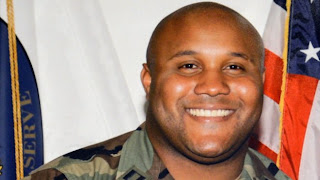 The Charles Dorner manifesto has been dismissed by the Los Angeles Police Department as the self-serving ramblings of a murderer, but at least one of the claims of the rampage shooting suspect appears to check out.

Dorner is accused of going on a rampage after being fired for the LAPD. He claims that his firing is retribution for reporting an officer he believed abused a schizophrenic person. Police believe that Christopher Dorner killed two civilians, then later shooting two police officers, killing one.

Before going on the rampage, Dorner posted a manifesto on Facebook maintaining his innocence and listing officers he planned to target.

In the manifesto, Dorner claims that one of the officers involved in the Rodney King beating remains on the force more than 20 years later.

“Are you aware that an officer (a rookie/probationer at the time) seen on the Rodney King videotape striking Mr. King multiple times with a baton on 3/3/91 is still employed by the LAPD and is now a Captain on the police department?”
Christopher Dorner’s manifesto also promised more violence, saying that the former U.S. Navy sharpshooter would use all of his shooting and survival training to enact his revenge.

Some of our more antagonistic and conspiracy-minded commenters were suggesting that I was avoiding this story on purpose. I don't see why.  Do you?

Please leave a comment.
Posted by Unknown at 1:45 PM