It seems that the Montgomery County, MD school district has removed religious holidays from its school calendar with the expected upset from the usual crowd.

What they seem to forget is that the war on Christmas began pretty much from the start of when it began to be celebrated in Roman times since most people knew that it was Saturnalia being repackaged.  Additionally, there has never really been any consensus as to what date would actually be that of Jesus' birth.  Anyway,  It wasn't until the Puritans came around and wanted to remove pagan influences from everyday life that the celebrations were muted down a whole lot:

That was the reason that George Washington attacked the Hessian forces in Trenton, NJ on Christmas Eve: It wasn't a holiday for the Continental soldiers. In fact, the US Congress was in session on December 25, 1789, the first Christmas under America’s new constitution. Gradually, some states made it a legal holiday with the first three states to make Christmas a legal holiday were in the South: Alabama in 1836, Louisiana and Arkansas in 1838. Christmas was finally proclaimed a holiday by the United States Congress in 1870: 81 years after the founding of the US. 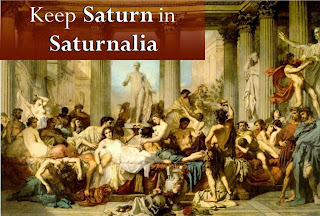 The modern concept of Christmas appeared about the time Charles Dickens penned his "A Christmas Carol" in the 1840s and was helped along by Queen Victoria. Historian Stephen Nissenbaum contends that the modern celebration in the United States was developed in New York State from defunct and imagined Dutch and English traditions in order to refocus the holiday from one where groups of young men went from house to house demanding alcohol and food into one centered on the happiness of children.

The real problem with Christmas is that there are both secular and religious celebrations of the holiday with the addition that the two different parts of the Christian Church Eastern and Western celebrate the holiday a couple of weeks apart.  In fact, how many people actually know what exactly  is meant by the 12 Days of Christmas, let alone still celebrate them?  In fact, you could have a seriously long Christmas celebration if you wanted to begin with Advent and go to Candlemas. I've heard some celebrations begin with All Saints Day and go to Candlemas.

Maybe you get the picture here, or maybe you don't.  The bottom line is that the US has some serious decisions to make if they truly want to place "Christ in Christmas".

Especially, since some Christian sects still don't see it as a Christian holiday.

Maybe the solution is to just take the Month of December off work.