Accidental Shooting of OR Turkey Hunter - No Charges 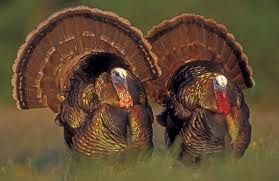 Richard Kidd, 44, of Portland, received shotgun pellet wounds to his legs when his 60-year old hunting partner, David C. Brant, also of Portland, fired at a turkey that flew out of its roost in a tree. The two were hunting around sunrise in the Wimer area when the accident happened, OSP said in a news release.

Kidd and Brant were about 70 yards apart and were wearing camoflauge clothing. Lighting and terrain also limited visibility, officials said.

We just had another case of a turkey hunting accident. Imagine the ones we don't hear about.

Why would hunters rear camoflauge clothing while hunting?  Is that to fool the animals?  Aren't they supposed to rear bright reds and yellows to avoid this very danger?

What could possibly be the justification for shooting such magnificant animals? Are turkeys out-breeding their environment and the turkey hunters doing a humanitarian service in killing them? Or is this just another sick and cruel activity which real men with guns like to participate in?

I think it's the latter.

What's your opinion?  Please leave a comment.
Posted by Unknown at 7:34 AM