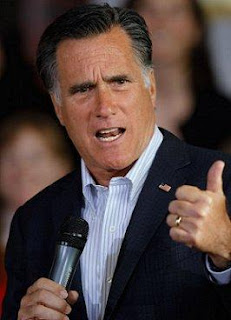 via The Maddow Blog where you'll find a wonderful list of Romney lies and deceptions.  I was most interested in the first three.

1. Speaking to the NRA, Romney said, "The Obama administration has decided that it has the power to mandate what Catholic charities, schools, and hospitals must cover in their insurance plans.... Here we are, just getting started with Obamacare, and the federal government is already dictating to religious groups on matters of doctrine and conscience."

In Massachusetts' governor for one term, Romney took the same position Obama has adopted. He somehow forgot to mention this.

2. Romney also told the NRA audience, "We need a president who will enforce current laws, not create new ones that only serve to burden lawful gun owners. President Obama has not, I will."

The grammar in this sentence makes it hard to understand, but the implication seems to be that Obama has created new restrictions on gun laws. That's a lie.

3. Romney also claims to be a "lifetime" member of the NRA.

In reality, Romney used to oppose the NRA, but became a "lifetime" member fairly recently by buying the honor from the group.

Those poor racist Obama haters, I almost feel sorry for them.

What's your opinion?  Does old Tricky Mitt even stand a chance?

Please leave a comment.
Posted by Unknown at 8:00 AM