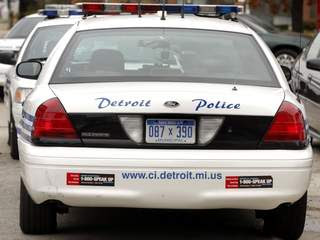 The incident relates to a quadruple shooting that happened around 1:30 a.m. Saturday morning on Inverness on the city's west side. Two men were killed and two others were injured.

Police say that at around 3:20 a.m. Saturday a 36-year-old man went to a Detroit Fire Engine Station near the scene of the shootings. He reportedly told the fire fighters that he was connected to the shootings.

However, when Detroit Police were called, they said the patrol units for the area were busy handling high priority runs and no one was dispatched to the fire house.

Firefighters say they kept the man at the fire station for almost four hours waiting for a police patrol car to pick him up. Eventually they put the suspect in a taxi and sent him to the 10th Precinct where he was taken into custody.

The poor Detroit cops are really being ridiculed for this one. But, it seems to me the obvious explanation is that the shooter only told the firemen he was "involved" in the shooting, like a witness maybe, not that he was the author of it.

In any case, people love to blame the cops whenever possible. And goodness knows they deserve it many times, but not in this case.

What the story does show, though, is another mass shooting that took place in a non-gun-free zone.  I guess the pro-gun crowd is just going to have to shut up about that one.  Every day we find examples which put the lie to their oft-repeated nonsense that mass shootings usually happen in gun free zones.

What's your opinion?  Please leave a comment.
Posted by Unknown at 8:37 AM