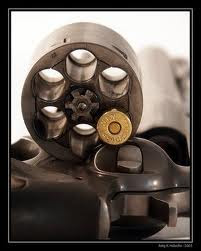 A man shot and killed himself early Wednesday during what police suspect may have been a game of Russian roulette.

The man, who was not identified pending notification of next of kin,, died shortly after 7 a.m. at Loma Linda University Medical Center, said San Bernardino police Lt. Paul Williams.

Detectives are investigating the possibility that the victim and at least one other person were playing Russian roulette with a loaded revolver. It is unknown how many times the gun was passed around before the round was fired, Williams said.

Police recovered the gun at the scene.

Well, here's two or three more lawful gun owners who have proven to be unfit to own guns. One is dead, but the others will just go one with their reckless behavior until someone else gets killed.

I'm making an assumption that the guys who play Russian roulette are drinking and doing other irresponsible behavior that makes them a danger to themselves and others.