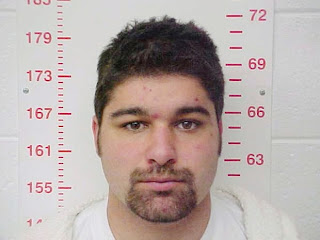 
A 20-year-old man is in jail in southwest Missouri on Friday on charges he planned a mass shooting at a theatre during the showing Sunday of the new movie Twilight.

Blaec Lammers told police in Bolivar, Mo., that he bought two assault rifles and 400 rounds of ammunition with the intent of carrying out a shooting that would be similar to one that killed 12 people and wounded 58 during a Batman movie premier in Aurora, Colorado, last July.

Police announced Lammers’ arrest on Friday. He was arrested Thursday and charged in state court with making a terrorist threat, armed criminal action and first degree assault, records show. He is being held on $500,000 bond.

Lammers’ mother alerted police on Thursday that her son and bought weapons similar to those suspect James Holmes allegedly used in the Aurora shooting, Bolivar police detective Dustin Ross said in a sworn statement to the court.


The biased spin doctors over at TTAG are all excited about the fantasy that young Mr. Lammars was heading to the theater BECAUSE it was a gun free zone and he'd be able to kill people like sitting ducks.

Nothing could be further from the truth. He himself admitted the reason, it was to imitate the Aurora Colorado shooter, James Holmes.

The real story here is that someone as sick as this guy was able to legally buy guns. He was a lawful gun owner, as was Holmes, who was so unfit to own them safely that the most basic examination into his mental health might have been able to raise red flags.

Licensing of gun owners, which would include an exhaustive mental health background check combined with a "may issue" policy, is the only way to weed out these dangerous characters.  We can't depend on their mothers dropping a dime.

What's your opinion?  Please leave a comment.
Posted by Unknown at 9:39 AM