John Lott Accuses the Others

On the Big Government site, which was created by Andrew Breitbart, whose name has become synonymous with making stuff up, John Lott accuses the gun control groups of making stuff up.

For all those individuals across the more than 22 years of legal carry, there were only 167 cases where the permit was revoked for a firearms related violation, or about 0.01 percent of permit holders.

It doesn't take a genius to realize that those 167 cases do not represent a comprehensive number. In many cases in which the criminal turns out to have had a concealed carry permit, that information is mentioned as an after thought. It is usually not the focus of the investigation. In fact, no one is even interested except the gun control folks.

So, the old less-than-1-percent argument is misleading, at best. But, to get an idea of the kind of people who go for this argument, you just need to check out the picture featured in the John Lott article. I suppose he selected this picture himself, which must depict exactly the kind of thinking he engages in. 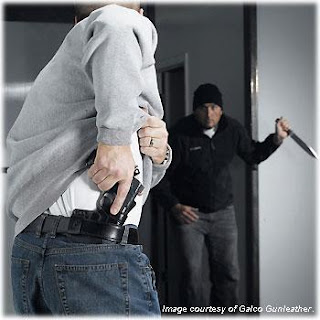 How's that for a realistic image of what the average gun owner can expect at any moment.


What's your opinion? Do you think John Lott really believes that only 167 Florida concealed carry permit holders out of 1.8 million have broken the law? Do you think this picture is a good example of what's in his mind?

Please leave a comment.
Posted by Unknown at 8:54 AM