Getting to Know Doc Holliday

via The Coalition to Stop Gun Violence where you'll find a wonderful interview with Mary Doria Russell author of Doc. 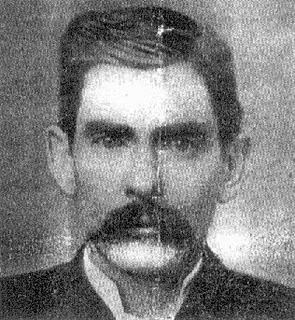 It turns out the famous participant in the shootout at the OK Corrall was not such a gunman after all.

In 1880, a year before the famous gunfight, he got into an argument with the gambler Johnny Tyler over who was allowed to run card games in which Tombstone saloons. Milt Joyce decided to end the argument by picking Doc up bodily and flinging him into the street. Infuriated, Doc obtained a gun (it was illegal to carry one in Tombstone), returned to the saloon and emptied the revolver, hitting Joyce in the palm and a bartender in the big toe. I'm not downplaying those injuries—Milt Joyce almost lost the hand, and the bartender was lamed—but they are hardly evidence of deadly accuracy.

The final question and answer of the interview I especially enjoyed.


Do you still own a gun or have one in your house?
My dad always wanted me to keep a pistol in the house “for protection.” I always told him, “I believe in statistics. Any bullet fired in the middle of the night by a startled, stupefied homeowner is more likely to hit a family member, a pet, or a neighbor in the house next door than an alert intruder.”
A few years ago, my father—an ex-Marine, career policeman, five-term sheriff—was showing a pistol to one of the grandkids. It went off and the bullet went through the sliding glass door and into the neighbor's back yard. Dad was stunned and said, as people always do, “I was sure the gun wasn't loaded.”
It was: Q.E.D.
So no guns in my house. But I have a very ferocious dachshund.

What's your opinion? Please leave a comment.
Posted by Unknown at 12:38 PM