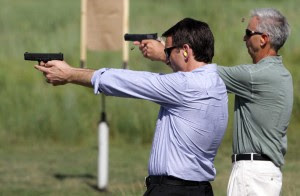 Tim Pawlenty visited a handgun instruction facility here today, telling reporters the visit was in part to showcase his commitment to gun rights.
“It’s not government’s place to further limit or impinge upon those rights,” Pawlenty said of the Second Amendment of the U.S. Constitution, which guarantees citizen rights to own guns.

Don't you hate it when politicians say things that are exactly what the people they're talking to want to hear? Don't you always wonder if they really mean it? I mean, if the former governor thought not owning guns and talking about gun control would get him elected president, do you think he'd still stick to his guns and spout off about the government impinging upon gun rights?

What's your opinion? Please leave a comment.
Posted by Unknown at 7:33 AM