Can Gunloons Be Good Parents? 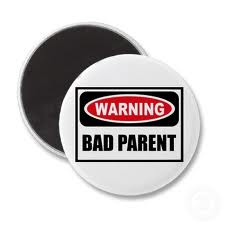 
To take it from the top, there is absolutely no shortage of firearm-owning parents who also weblog, who have been 100% successful at keeping their children from unintentionally or intentionally shooting themselves or others through the use of “setting firm boundaries” in addition to self-imposed safety measures – SayUncle, JayG, NancyR, Les Jones, and Robb Allen are all ones that come to mind right off the top.

I could easily "fisk" this, but I won't.  But I will note a couple of items.  First, Linoge (Sullivan) has no idea whether these weblogging gunloon kids have been involved in intentional or unintentional shootings.  Second, isn't the notion that a kid has to shoot himself or another, a very low bar for good parenting?  And do near-accidents or near-incidents count?

For example, I'll bet a very small fraction of a percentage of drunk drivers are ever involved in an accident.  Does that mean it's ok?  Most rational people would say, 'hell, no.'

And I'd bet most of us could recount stories of people we knew growing up who had absolutely abysmal parents who managed to escape childhood relatively unscathed and more or less intact.


I see a number of problems with gunloon parents.  First, and what is commonly mentioned but denied by every gunloon, is that despite how well-trained and disciplined you may believe a kid is--he or she is just about 100% guaranteed to violate whatever rules or training are invoked.  Doesn't matter if the training concerns guns, drinking, drugs..whatever..a kid is going to get into it.  Parents who don't believe this are deluding themselves.

Second, gunloon parents create a fantasy that a gun is needed for respect or self-protection.  Kids tend to internalize the habits and attitudes of parents.  Gunloon parents are demonstrating that might makes right.  It's often quite a confusing message because, invariably, it's dad who feels the need to carry a firearm--not mom.
Posted by Jadegold at 2:28 AM