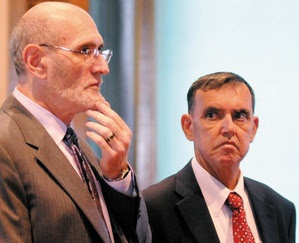 
Gun charges against a state lawmaker might be resolved in time for him to rejoin the Legislature, his attorney said Tuesday.

That's right, that's how they do it. Raging out-of-control maniacs are often allowed to plea-bargain or even request to have their charges dropped. And the pro-gun crowd, who never tire of complaining about the lenient sentencing guidelines for criminals, applaud. At least they applaud as long as the offending gun owner can somehow claim to be one of the good guys. For them, just about anything goes, "bad rules be damned," is their expression. And if the guy goes too far, they simply cut him off and relegate him to the dark side of criminal gun owners.

I've often had a hard time distinguishing one from the other, the good guys from the bad guys. I believe there's a big gray area.