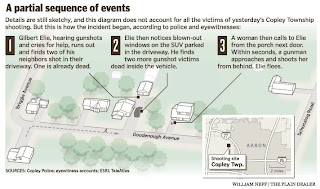 Akron.com provides a step-by-step account of the movements of the killer. Basically, as we've been reading all week, he went from bouse to house, through backyards, even chasing one victim into a neighbor's house in order to execute him, an 11-year-old.

Hance was killed by a Copley police officer, Mier said, about 10 minutes after the first 9-1-1 call was received.

How many times have we heard that flippant remark, "when seconds count, the police are minutes away."  This infers that in places like Ohio where many homes have guns and the percentage of concealed carry permits is high, we don't have to wait for the police to put a stop to things like this.

Yet, as we saw in Arizona a few months ago, this is just not the case.  As with the Loughner shooting, it's a safe bet that gunowners were on hand but they turned out to be powerless to stop the onslaught of violence.

Why, I don't know, probably several reasons, but I have one theory.  The vast majority of gun owners, even concealed carry guys, are not trained for this kind of intervention.  They may think they are, but when the SHTF, as they like to say on The Truth Abough Guns, they're not up to the task.  It takes quick decisive action to intervene, and courage, knowing that getting involved, you go from being a neutral spectator to a potential target.

Most people are frozen with fear during those critical seconds or minutes. Their owning guns does nothing more than make them feel safe, and of course, increase the chances of gun mishaps of many kinds.

What's your opinion?  It seems to me this story illustrates that altough the exemplary action of the police was not as swift as we'd like it to have been, it was pretty good.  And once again we count ourselves lucky that none of the local gun owners made it worse.

What do you think?  Please leave a comment.
Posted by Unknown at 7:44 AM