The Second Amendment in Art!

This is Charles Henry Granger’s Muster Day which is in the National Gallery in Washington, DC.

There is another version of this at the located at the Pennsylvania Academy of Fine Arts in Philadelphia called Militia Training by James G. Clonney (1812 – 1867). 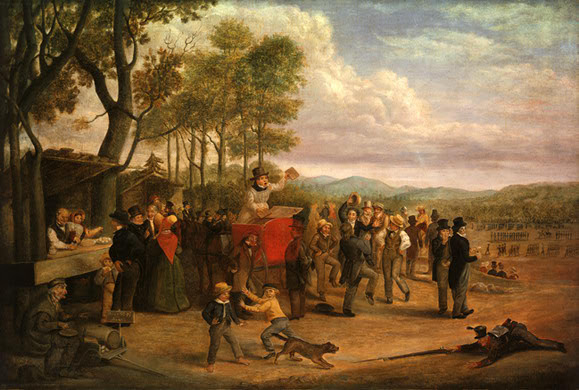 While able-bodied citizen between the ages of eighteen and forty-five were considered members of the militia under the militia act of 1792, The annual muster day was how they accomplished the actual enrollment of the members into their units. The Militia Act stated:

Be it enacted by the Senate and House of Representatives of the United States of America, in Congress assembled, That each and every free able-bodied white male citizen of the respective States, resident therein, who is or shall be of age of eighteen years, and under the age of forty-five years (except as is herein after excepted) shall severally and respectively be enrolled in the militia, by the Captain or Commanding Officer of the company, within whose bounds such citizen shall reside, and that within twelve months after the passing of this Act. And it shall at all time hereafter be the duty of every such Captain or Commanding Officer of a company, to enroll every such citizen as aforesaid, and also those who shall, from time to time, arrive at the age of 18 years, or being at the age of 18 years, and under the age of 45 years (except as before excepted) shall come to reside within his bounds; and shall without delay notify such citizen of the said enrollment,

There's that nasty word, enrollment, which is what one needed to do to actively be a member in a militia unit. And as any person with serious knowledge of the militia system will ell you that service was compulsory.

Local companies of militia would gather annually for parade and inspection at their regiment’s muster day which often involved a thousand or more men from half a dozen towns. Food and alcohol vendors, showmen, fiddlers, auctioneers, charlatans, gamblers, and several thousand spectators turned these gatherings into regional festivals in an era of few such diversions. Muster days were structured social events in a regimental towns in ways not duplicated since. By 1830, muster days were under attack from those who resented the required participation. They were joined by temperance advocates, who objected to the considerable public drunkenness attending each muster, and later by critics of the Mexican War, who claimed that the existence of a peace-time militia had in fact led to this conflict.

“Their general good conduct on the field was creditable to officers and soldiers – with the exception of a few, (such as never know how to leave off when they have done), who fired promiscuously about the plain a long time after they had been dismissed, a practice always disreputable to good soldiers and the officers to whom they belong. the occasion attracted an unusual assemblage of spectators, pedlers, rumsellers, rumdrinkers and gamblers; whose noise, ribaldry, intoxication, and violation of the laws in the face and eyes of the authorities, was disgraceful to the place, to the occasion, to those specially engaged in it, and to all who looked on and tolerated it. We leave it to the people to judge whether there be more good than evil derived from ‘making a muster.’” –Report of the Amherst Muster Day from The Farmers’ Cabinet, 1834

Exemptions to Militia service were:

Vice President, federal judicial and executive officers, congressmen and congressional officers, custom-house officers and clerks, post-officers and postal stage drivers, ferrymen on post roads, export inspectors, pilots, merchant mariners, and people exempted under the laws of their states”notwithstanding their being above the age of eighteen and under the age of forty-five years.”

So, militia service was NOT universal. In fact, Men actively sought exemption from militia service. This was a reason for the carnival atmosphere at muster days. Again from Story:

And yet, though this truth would seem so clear, and the importance of a well regulated militia would seem so undeniable, it cannot be disguised, that among the American people there is a growing indifference to any system of militia discipline, and a strong disposition, from a sense of its burthens, to be rid of all regulations. How it is practicable to keep the people duly armed without some organization, it is difficult to see. There is certainly no small danger, that indifference may lead to disgust, and disgust to contempt; and thus gradually undermine all the protection intended by this clause of our national bill of rights.

To be quite honest, people had jobs and other things to do than militia service and sought exemption from that duty. The muster day had a carneval feeling because it made the obligation less painful. Still there was an obligation to perform militia service. This was compulsory military duty which required time away from your work.

Now,people are demand the right without the obligation encumbent to that right.