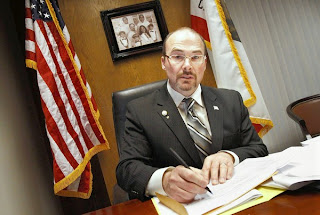 The Los Angeles Times reports on the latest incident of a pro-gun guy "forgetting" he has a gun at the airport.


A California lawmaker who has been a vocal advocate for gun rights was detained by police Wednesday at Ontario International Airport after attempting to take a loaded gun onto an airplane.

Tim Donnelly, a Republican from San Bernardino and the Assembly's lone tea party member, was headed for a Sacramento-bound flight to attend the opening of the new legislative year. Authorities said screeners at the security checkpoint discovered a loaded .45-caliber Colt Mark IV pistol and an ammunition magazine with an additional five rounds in his carry-on luggage.

His big thing is immigration. The article says he's a former Minuteman, but I suspect the Minitemen are like the Marines. Once a Minuteman, always a Minuteman.

What's your opinion? Is this racist, ultra-conservative scofflaw politician a danger to others like your average terrorist or airplane hijacker? I don't think so. Do you think his attitude is that of many otherwise law-abiding gun owners who do what the hell they want: "bad laws be damned?" Or is it really possible that he's so nonchalant about his gun that he really did forget.

Whatever the true explanation, is it right that he should get just a slap on the wrist, a misdemeanor, which will enable him to continue on his merry way?

What's your opinion? Please leave a comment.
Posted by Unknown at 7:31 AM