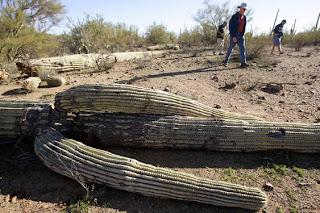 Four saguaros up to 10 feet long lay prone on last week near the base of a towering hill in Ironwood Forest National Monument — the latest symbols of a problem and a dispute that won't go away.
The saguaros near Avra Hill were found a month or so ago with spent bullets and shells lying nearby, say members of the Arizona Native Plant Society who reported them to the Bureau of Land Management. The BLM's law-enforcement branch is investigating this incident — one of two ongoing cactus-shooting investigations, said Mark Rekshynskyj, a BLM official in Tucson.
"It looks like they targeted the arms first and shot off the arms, then went to the bases and shot them down," said the plant society's John Scheuring.

You know who does that? It's the same guys who shoot the stop signs. These are not gang members or drug dealers. These are so-called legitimate gun owners and their shooting activity belies the claim that they are responsible and safe. They're reckless and dangerous and they couldn't care less about the rules and regulations except for ensuring they can break them with impunity.

What's your opinion? Please leave a comment.
Posted by Unknown at 9:17 AM