Gunloon Bob Owens Has a A Plan

Upset at President Obama's remedies to gun violence, Bob Owens has a plan: 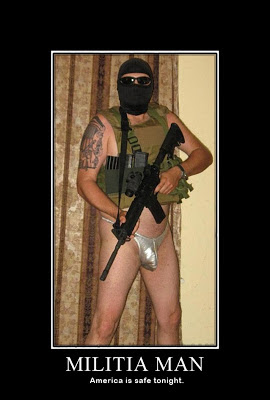 Were an angry group of disenfranchised citizens to target in a strategic manner the substations leading to a city or geographic area—say, Albany, for example—they could put the area in the dark for as long as it took to bring the substations back online. Were they committed enough, and spread their attacks out over a wide enough area, perhaps mixing in a few tens of dozens of the residential transformers found every few hundred yards along city streets, they could overwhelm the utility companies ability to repair the damage being caused or law enforcement’s ability to stop them. The government could perhaps assign a soldier or cop for every transformer, substation and switch, but they’d run out of men long before they ran out of things they need guarded. Not that the government could even guarantee to actually protect the transformers they were guarding; a residential transformer is a big, stationary target, and the substation transformers and switches and other equipment even bigger targets.  Residential transformers are easily “touched” by even a moderately competent deer hunter from hundreds of yards away, perhaps separated by roads, subdivisions, swamps or streams. Substations are a dense area target easily struck from a half-mile or more away.
Meanwhile, the lone wolves and small teams would simply shift to other targets of opportunity left unguarded by an overwhelmed and outmatched government force, of which there are many.
How many days with partial power or no power, how many nights in the dark, would it take before the local economy collapsed in the targeted area? Insurgents could cripple a city, region, or state, without ever firing a bullet at another human being.
Progressives seeking to undermine the Constitution seem to think they hold all the cards. I would warn them that they are not remotely prepared for what will happen if they attempt to cross Constitutional boundaries and natural rights.
It could be a cold, dark winter.
Tread carefully.

Wow.  Bobby's under the impression that he and a bunch of other fat, out-of-shape white dudes can bring down the electrical grid.

But let's entertain Bobby's fantasies a bit.  Suppose he and his other pudgy gunloon pals manage to do as they threaten and knock out power.  Does Bobby actually believe the eviiillll gubbermint is going to suffer and immediately capitulate to free guns for all?  Actually, after Bobby and his buddies succeed in denying power, food, heat, clean water to his neighbors.....those neighbors are going to drag Bobby and his other fat, white gunloons out into the street where the Mother of All Asskickings will take place.  Bob Owen and his pals will be begging to be waterboarded at Gitmo before they're done.