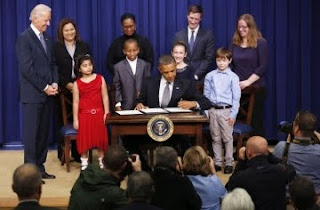 With the tearful parents of 7-year-old Sandy Hook victim Grace McDonnell looking on, President Obama announced a bold new plan to reform our gun laws at the White House today and urged Americans nationwide to call their Members of Congress to demand immediate action.

You can read CSGV's official statement on the press conference here.

It was my distinct honor to attend this event. I have never heard our President sound more determined, more resolute. His message about our response to this tragedy was simple and clear: "This time must be different ... If parents and teachers, police officers and pastors, if hunters and sportsmen, if responsible gun owners, if Americans of every background stand up and say, 'Enough; we’ve suffered too much pain and care too much about our children to allow this to continue'—then change will come. That’s what it’s going to take."

Ready to do your part? Call your Members of Congress today, and every day, through the Capitol Hill switchboard at (202) 224-3121 and tell them you demand immediate action on the President's proposals to end gun violence.
We've all waited for this moment, and now it has arrived. Don't hold back. Let's move forward, together, and make sure that days like December 14, 2012 are not part of America's future.


Sincerely,
Josh Horwitz
Executive Director
Posted by Unknown at 9:15 AM