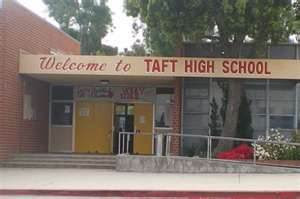 
A Taft Union High School student targeted and shot by a classmate was on life support and in intensive care Friday but is expected to recover, hospital officials said, as law enforcement authorities sought to discern a motive for the attack.

The 16-year-old boy, whom authorities have not identified, suffered injuries to the lungs and liver after shotgun pellets hit his chest and abdomen, officials at Kern County Medical Center said.

Law enforcement officials said the suspect, also age 16, would be charged with attempted murder. They did not give his name because he is a minor.

They said they were investigating what role bullying may have had in motivating him to fire a 12-gauge shotgun at students in his science class. In addition to the hospitalized victim, the suspect tried to shoot a second student and missed before the teacher was able to talk him down, authorities said.

An UNARMED teacher talked him down.  Get it?

What's your opinion?  Please leave a comment.
Posted by Unknown at 9:54 AM