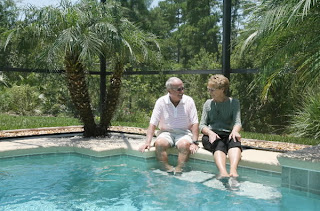 
Bullets whizzed into Gerry and Barbara Benedict's backyard, disrupting a quiet Sunday afternoon and scaring them silly.
The stray bullets that landed near their pool last year came from a private shooting range adjacent to their property at the Country Club of Mount Dora. The couple complained to local-government officials, who were powerless to do anything since the state stripped local governments of the ability to pass their own specific gun regulations.

Now, in the name of public safety, Lake County officials are putting the onus on legislators to tweak the 2011 law that gave the state sole authority over gun laws. Prompted by the Benedicts' situation, Lake is seeking "statutory changes" to deal with dangerous discharges of firearms.

Can you imagine a state which has laws like that? This is one of the reasons Florida wears the crown.

What's your opinion?  Please leave a comment.
Posted by Unknown at 7:25 AM