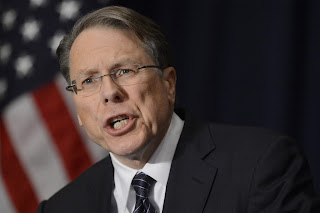 Perhaps most interestingly, LaPierre is prepared to attack not just the proposed assault weapons ban, but also the universal background checks that are perhaps the least controversial aspect of the current debate and the early focus of the White House.

In this report of the upcoming statement by Wayne La Pierre, not only does he express the NRA's refusal to cooperate on background checks, but he does it in a less-than-honest way.  The fact that criminals won't cooperate has nothing to do with it.  By saying that, he attempts to paint gun control folks with the brush of stupidity, as if we really think criminals will be affected. Plus he deflects attention from the fact that law-abiding gun owners, who would be affected, are the source of criminal guns. In fact, private sales without background checks is one of the four ways in which guns move from lawful ownership into the black market.

Continuing in his mendacious way, La Pierre goes on to lament the mental health system and the criminal justice system, more deflection from the first main problem which is gun availability to unfit people.

Is it any wonder that gun rights advocates are so difficult to reason with?  They have Wayne La Pierre showing them the way.

What's your opinion?  Please leave a comment.
Posted by Unknown at 7:34 AM