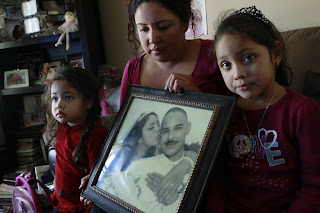 Jose de la Trinidad, a 36-year-old father of two, was shot Nov. 10 by deputies who believed he was reaching for a weapon following a police pursuit. But family members and a witness to the shooting said that De la Trinidad, who was unarmed, was complying with deputies and had his hands above his head when he was shot.

De la Trinidad was shot five times in the upper and lower back, according to the Los Angeles County coroner's report dated Nov. 13. The report describes four of those wounds as fatal. He was also shot in the right forearm and right hip, with both shots entering from behind, the report found.

“Here's a man who complied, did what he was supposed to, and was gunned down by trigger-happy deputies,” said Arnoldo Casillas, the family’s attorney, who provided a copy of the autopsy report to The Times. He said he plans to file a lawsuit against the sheriff’s department.

This story initially said that the two deputies involved in the shooting were place on administrative leave immediately following the shooting. They were taken off patrol and returned to duty five days later.

I wonder if we'll hear that old justification from the gun-rights crowd that shooting a guy in the back is sometimes necessary because he could pull a gun real quick and fire over his shoulder as he's running away.

What do you think?  Please leave a comment.
Posted by Unknown at 7:16 AM