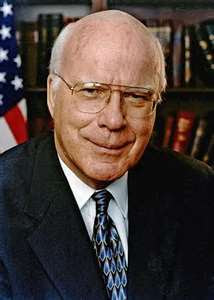 Leahy acknowledged the deep ideological divide inside his panel, but also asserts that Judiciary “has done more legislation than just about any other committee” under his leadership.

Leahy said he will be pushing for an expansion of background checks on all gun sales, a proposal that appears to have bipartisan Senate support in the Senate and broader appeal to the American public in the wake of the Newtown, Conn. shooting.

The Vermont Democrat, though, pointedly didn’t mention the assault weapons ban.
“I just don’t understand how anyone could be against universal background checks,” Leahy said in an interview. “We need to close the loopholes” from private gun sales or weapon purchases at gun shows.

To me this is the one issue that really shows the gun-rights advocates for what they are. We've heard all the excuses, from private citizens don't have access to the NICS system, to people should be allowed to do what they want with their property.  All of it's nonsense.

The fact is, gun rights fanatics care only about gun rights.  They don't care if guns will flow more easily into the criminal world or if more people will be killed as a result. Self-centered in the extreme, they care only for their own convenience and in never giving in an inch in the battle for their so-called rights.

What's your opinion?  Please leave a comment.
Posted by Unknown at 7:26 AM