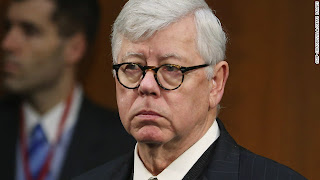 National Rifle Association President David Keene signaled Thursday that Senate Majority Leader Harry Reid, a Democrat who has enjoyed the powerful gun lobby's support in the past, could prove pivotal in the heated debate over gun control.

Reid has found himself in a delicate position as he tries to navigate the desires of many members of his pro-gun rights Nevada constituency and the White House and members of his caucus' intensified push over gun control. As Senate majority leader, Reid has great influence to speed or slow the consideration of legislation on Capitol Hill.

"He's under incredible pressure right now because he's got, as any member of Congress or senator does, he's got his own beliefs. He's got the views and the demands of his constituents on the one hand and the pressure he faces from party leaders and his president on the other," Keene told journalists at a Christian Science Monitor sponsored breakfast Thursday. "So where Harry Reid ends up in this debate is anybody's guess and I think that's one of the guessing games that's going on around Washington now."

Reid has twice opposed the assault weapons ban back in 1992 and 2004, has a B rating by the NRA for his pro-gun rights voting record and since 2008 has received just shy of $8,450 from several gun lobbies according to an analysis of campaign contributions from the Center for Responsive Politics.

It doesn't seem to me that $8,000 in contributions should be a deciding factor. Perhaps Reid is a true believer - many from Nevada are.

What do you think?  Please leave a comment.
Posted by Unknown at 6:16 AM