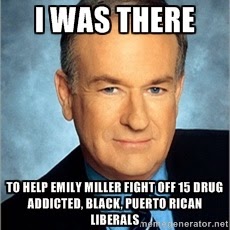 What an exciting story!  A young woman returns home one afternoon to find a swarthy criminal ransacking the house.  Fleeing this animal, she runs outside--only to be pursued by a gang of over a dozen criminal hoodlums!  If only she had a firearm...

Emily Miller--a Faux News "reporter" parlayed her harrowing experience into a book and a lecture tour about how she got a gun and how Obama wants to take it away.

Problem is, the story is fulla crap.

A document from the D.C. police department shows that Emily Miller, the chief investigative reporter for WTTG-TV (Fox 5), didn’t fall victim to a home invasion on New Year’s Day 2010 as she has told various interviewers in recent years, including some gun-rights lobbying groups. Instead, Miller spotted someone leaving the property as she returned from walking a dog.“[Miller] stated that she left out to walk the dog at 1515hrs and when she returned at 1525hrs she observed [the suspect] exiting from behind the fence which leads to the side of the house. [Miller] asked [suspect] ‘What are you doing here’ and [suspect] stated ‘I am delivering firewood,’” according to a supplemental D.C. police report.

But the 15-person-strong band of scruffies doesn’t make the supplemental report’s description: