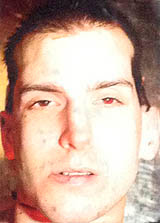 Trib Live reports with a follow-up to the Pittsburgh Psychiatric Clinic shooting.

After he tangled with police and was committed to a mental health facility in Oregon in 2010, John F. Shick should not have been able to buy a gun in America under federal law.
But an Albuquerque, N.M., man told investigators he sold two 9 millimeter handguns with no background check to a man resembling Shick when Shick responded to a newspaper ad in April 2011, Pittsburgh police Cmdr. Thomas Stangrecki said on Friday.
Private sales without background checks are legal under New Mexico law. Shick tried to buy a handgun in Oregon in January 2011 and was denied after a background check.
Pittsburgh police believe Shick used the handguns to fatally shoot therapist Michael Schaab, 25, of Regent Square and wound five others at Western Psychiatric Institute and Clinic on March 8.

I find it hard to believe gun-rights folks still try to justify this one.

What's your opinion? Please leave a comment.
Posted by Unknown at 7:14 AM