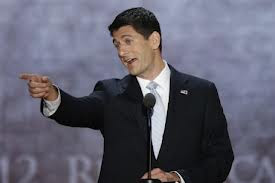 Vice presidential candidate Paul Ryan courted the votes of hunters on Saturday in a speech to a sportsmen's group, suggesting that President Obama would seek to strip gun owners of their rights by appointing judges hostile to a broad interpretation of the Second Amendment.

"I shudder as a gun owner ... what would he do if he never has to face the voters ever again?" Ryan asked aloud during a speech to the National U.S. Sportsmen's Alliance's 16th Annual Save Our Heritage Banquet here.

"The next president is going to pick a lot of judges. The next president will appoint a lot of different judges and these are lifetime appointments. If you want to make sure that judges respect our Second Amendment rights, you need a president who respects those rights as well," he said.

Unlike Wayne, who actually says Obama will come after your guns, Paul Ryan is saying it in a slightly more nuanced way, focusing on the appointing of judges.  This makes it quite a bit more truthful.  We all know politicians will say anything, but in this case I think he's got a point.

I'm hoping it turns out to be true that Obama has the opportunity to appoint good judges.  I'm also hoping La Pierre's prediction turns out to be true, not that I believe for a minute that his motives are anything but mercenary.
Posted by Unknown at 7:27 AM