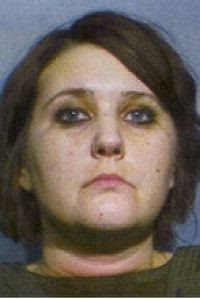 Assistant Prosecutor David Zeyen said Stredney confronted Hart in the parking lot of NCO Financial Systems on Frantz Road as he arrived for work on the morning of Dec. 14. She tried to force him into her car at gunpoint and shot him in the face when he refused.
She threw the handgun from the window of her car as she fled and was stopped by Dublin police less than a mile away.
Stredney's mental illness was among the reasons that Hart had called off their wedding plans, Zeyen said.
She purchased the gun a week before the shooting and asked police to show her how to use it, claiming she had been a burglary victim and needed to protect herself.
Stredney, of Warren, Ohio, made a lengthy statement in court, saying she had been under a psychiatrist's care for 19 years but "no one knows what's wrong with me."

Gun rights advocates are opposed to any and all attempts to screen prospective gun buyers for mental fitness. This, thay say, would infringe on their god-given fundamental human right to own that particular inanimate object.

The result of all this freedom is in the news every day. Usually it's men shooting women in domestic incidents, but sometimes it's like this.

What's your opinion? Are Ohioans more free or less free because of the gun rights they enjoy?

Please leave a comment.
Posted by Unknown at 9:38 AM