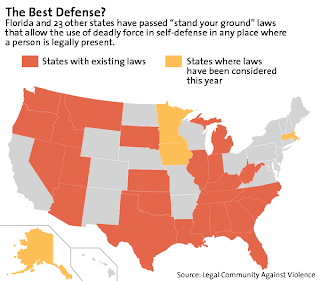 The National Rifle Association continues to press more states to adopt Florida-style "stand your ground" laws like the one that's made it difficult to prosecute George Zimmerman, the self-appointed neighborhood watch captain who shot and killed 17-year-old Trayvon Martin in Sanford, Florida, in late February. Zimmerman has claimed self-defense despite the fact that Martin was unarmed. Since "stand your ground" laws allow people who feel threatened to use deadly force—even if they have an opportunity, as Zimmerman did, to safely avoid a confrontation—Zimmerman has not been arrested or charged. (If you haven't heard about the Martin case, get the full rundown in our explainer.)

Has the entire country gone crazy? No, not the entire country, but a good part of it. What reasonable person could possibly condone such horrendous nonsense? This is a bunch of grown-up men with guns acting like adolescent bullies in the schoolyard, and backed up by the law.

What's your opinion? Please leave a comment.
Posted by Unknown at 8:01 AM