Democrats at the NRA Convention are Rare 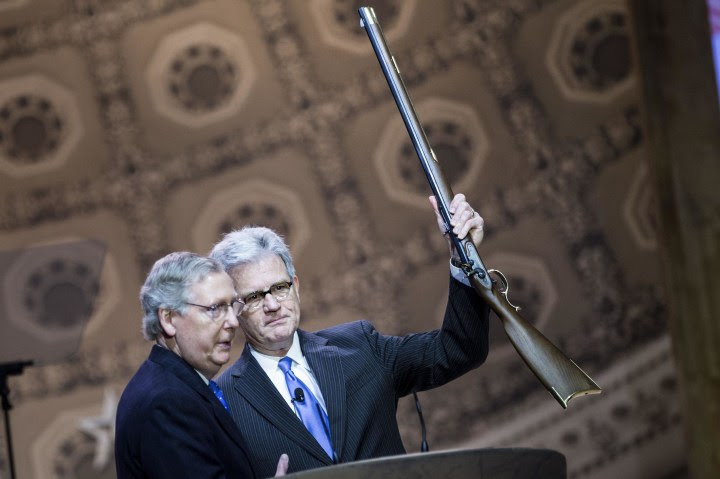 Republican Sen. Tom Coburn (R) holds a gun given to him by U.S. Senate Minority Leader Mitch McConnell during the Conservative Political Action Conference on March 6, 2014. McConnell is one of many Republicans planning to address the National Rifle Association at its annual meeting on Friday.

The lone Democrat slated to address the organization is Sheriff David A. Clarke Jr. of Milwaukee County. Clarke has won headlines for ads that have called guns a “great equalizer” and suggested that “simply calling 911 and waiting is no longer your best option.”
While the slate of speakers at NRA events has always dominated by conservatives – many seeking the group's support for a bid for higher office – it hasn’t always been free of Democrats elected to federal office.
In 2011, West Virginia Sen. Joe Manchin spoke to the NRA’s “Celebration of American Values Leadership Forum,” even plugging the famed political ad depicting him shooting a cap-and-trade bill with a rifle. (Manchin later earned the ire of the organization for working on background check legislation.)
New Mexico Gov. Bill Richardson submitted a video for presentation at an annual meeting in 2007, during his failed presidential run. The same year, powerful Democrat Rep. John Dingell was praised as a “longtime visionary statesman” as he was introduced to the crowd. Now-retired Oklahoma Democrat Rep. Dan Boren was also regular presence at annual NRA events.
The dwindling of Democratic speakers is reflected in the powerful gun lobby’s political giving as well, which has fluctuated over the last two decades.
So far this cycle, the organization has donated funds to just nine House Democrats and no Senate Democrats (a total of $12,000) compared to contributions totaling almost $240,000 to 151 Republicans, according to the Center for Responsive Politics. That’s just four percent to the president’s party.
Posted by Unknown at 7:32 AM