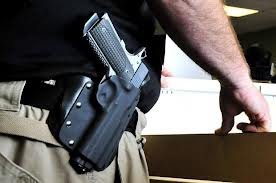 
Two dozen men with guns entered an Oklahoma City diner promptly at midnight on Wednesday, intent on inaugurating a pernicious new law allowing the state’s 142,000 citizens with concealed-handgun licenses to begin wearing their loaded weapons publicly. “I just feel more secure and safe,” Joe Wood, an aircraft mechanic, told The Oklahoman newspaper, his Taurus PT145 pistol ready for action against any sudden attack by the eggs and burgers.

Other Oklahomans’ sense of security and safety was not on the midnight menu, though law enforcement officials made their objections clear when “open carry” was signed into law in May by Gov. Mary Fallin, a Republican. A previous version was vetoed in 2010 by Gov. Brad Henry, a Democrat, over such questions as how to sort out licit gun wielders from perpetrators at a crime scene.

Statehouse proponents, ever obeisant to the gun lobby, contend that anyone with a handgun license has to pass a strict state check of criminal and mental health records. The dangerous loophole here is that Oklahoma is grossly delinquent in such oversight, submitting fewer than four cases last year to the federal mental health watch list.

Poor reporting on the mental health records makes the claim that concealed carry permit holders are safe and responsible a lie. The same kind of poor reporting happens when they do wrong. No one is keeping track of how many of them actually commit crimes.

What's your opinion?  Please leave a comment.
Posted by Unknown at 8:25 AM