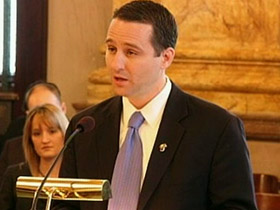 Yes..this so winning on many levels.

'He's Mad...He's Got The Gun':
On July 11, Jordan's wife, Melissa, called 911 late in the evening. She immediately hung up after an emergency dispatcher answers. The Dispatch described what happened when 911 operators called back:
"Just please get somebody here ... My husband, please."

"He's had some drinks," she said. "He was pushing me around, throwing stuff. Because I called you, he wants - he says it's over."

Still better:
Both Jordans have concealed carry permits, Plunderbund reports, and Melissa later told dispatchers that "he never threatened her with a gun." But she did say that Kris "started arguing with her and pushing around."

This story has the whole gunloon repertoire: GOP State Senator owned by the NRA, lots of guns in the house, CCW holders, drinking, domestic violence.

All that's missing is a shirtless Jordan being wrestled to the ground in his front yard, by police next to his car that's up on blocks while being taped for an upcoming Cops episode.
Posted by Jadegold at 1:41 AM