Here He Is - The Amazing Anders 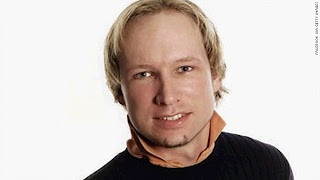 Breivik is a member of the Oslo Pistol Club and has three weapons registered in his name, according to leading Norwegian newspaper VG, citing Norway's official weapons register. They are a Glock pistol, a rifle and a shotgun, VG reported.

You know what's happening right now on the pro-gun blogs, you know the ones who keep accusing us of "dancing in the blood" of gun violence victims? Well, they're furiously typing out the facts right now which prove registration of guns doesn't work. Norway has that, and it didn't stop this fanatic from killing people.

The fact is, the extreme rarity of these incidents in Norway proves just the opposite. In addition, the gun guys have to own this guy as one of their own, since he belonged to a gun club, they have to list him with the right-wing fanatics who've done violence, and they have to admit that stringent gun control laws do not equal gun banning or lead to gun confiscations.

What do you think? Please leave a comment.
Posted by Unknown at 4:20 PM