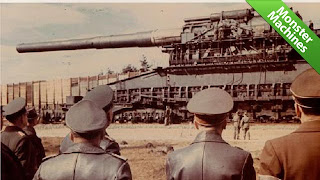 The Gustav had a bore diameter of 800 mm (just under a yard) and used 3000 pounds, more than a ton, of smokeless powder charge to fire its two primary shell types: a 10,584 lb. high explosive (HE) shell and a 16,540 lb. concrete-piercing shell—roughly the weight of an unladen 71-passenger school bus, travelling at 2700ft/s.
With a maximum elevation of 48 degrees, the HE shell could hit a target 29 miles away, while the bunker-buster could nail anything within 23 miles—both with reasonable accuracy. The Gustav could basically fire a shell over the widest point of Long Island, NY and hit nothing but water. If it did hit, the HE would leave a 30-foot deep crater while the piercing round could penetrate as much as 264 feet of reinforced concrete (or height of the Seattle Exchange Building).
The Gustav, luckily, saw only very brief action. It fired 300 shells on Sevastopol (at a rate of about 14 shells a day) and 30 more during the Warsaw Uprising of 1944 before being captured by Allied troops and chopped up for scrap. Its 7 million Deutsch Mark sister, the Dora, was destroyed by the Germans themselves to keep it from falling into the hands of the Russians. The rest of the Nazis' evil War Machine would fall by 1945 after Allied forces finished curb stomping them back across the Rheinland.